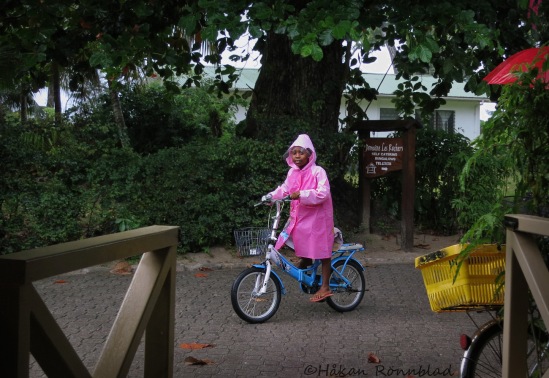 Caught by one of those heavy showers that suddenly appears in this region of the Indian Ocean. She seemed happy enough anyway and after a short while the sun was dominating the scene again.

In the island of La Digue in the Seychelles, a woman dressed in the local tourist-company uniform started to chat with me at the guesthouse where I stayed.

She was a likeable person and I recalled having taken a picture of a younger woman (see above) with the same uniform as the one she had, which I told her.. Let me see it she said.  I showed it to her and her instant comment was  “it´s my daughter”.

One of the highlights on my two-week visit at the Seychelles was the dive at the Ave Maria rock! You´ll see it as the silhouette island in one of the images.

It was me, the dive master and three french doctors who had arrived from La Reunion to do some sailing around the Seychelles archipelago on board an impressive catamaran. So I was in good hands..

Ave Maria is a granite rock that offers some nice diving conditions. White tip reef sharks are often spotted around here. The variety of life is astonishing as you can see on the images.

One of the interesting creatures we encountered was the Scorpionfish.  It´s much like a chameleon. It is also very venomous, so don’t provoke! I have enhanced the fish sharpness and contrast and as you see it’s still hard to discover.  Clue: you find the eyes at the lower part of photo.

After the visit to the underworld the french divers were a little disappointed for not having seen any sharks despite of my bleeding leg!! (collision with some corrals)

All photos taken with Canon Powershot S-100 with UW-house. This was my second visit under water with a camera. It´s tricky!

But by no means the blues.. Oh no, this is the Seychelles.

As you see I have done some street photography and visited the fish market in the capital Victoria.

The three ladies with umbrellas is on the island of La Digue.

There is a green version as well

Thank´s Miles for giving me inspiration for the title!

I met Adrian Willington a couple of weeks ago when taking a bicycle tour around the Seychelle island of La Digue. He was walking along the sea-shore carrying a big octopus and of course my curiosity was awaken

He told me that he was working as a security guard at night but during the day he used to go fishing for octopus and had done so since he was young.

After chatting with him for a while I asked if I could go with him the next time he was going fishing. That’s okay,  he said.  Two days later he came by the guesthouse where I was staying and a little later we took off by bicycle towards the beach where he usually goes fishing.

His tools are a bit dated. The flippers are not in best shape and there is a big hole in his wetsuit. He uses a couple of metal sticks to dig out the octopuses! It’s a great experience to accompany and observe the Seychellois diver. We are swimming around a pretty extensive area during more or less 3 hours!

When Adrian spots his prey he is capable of diving down to ten meters depth and stay down for a couple of minutes.

The area where we hunt is also a superb snorkel spot and the place is steaming with fishes of all colors and shape. I see a couple of sea turtles, stingrays and so on.
Adrian says that he almost daily sees sharks when his out but makes no drama about that! 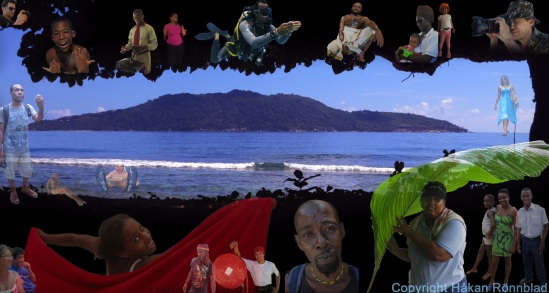 The difference between a nice journey and an extraordinary adventure is the persons you meet!

The Eco system appears to be in balance, people in general seem happy and the two Giant tortoises definitely had their moment in paradise this morning.  (got my attention at breakfast doing their donkey like love noise)

The sea turtle I met yesterday when diving at the “Ave Maria” rock! White tip reef sharks often seen at that spot, but we were not lucky on this dive. Millions of other under water creatures made me happy anyway!

In one of the images you see the sun drop behind Silhouette island.

Jemmy posing at his restaurant at Grand Anse in La Digue, the smallest of the three principal islands in Sheychelles. The rhythm of life here is slow, main transportation is bicycle and ox cart.