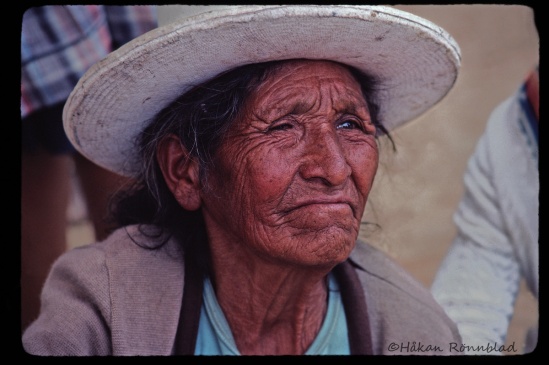 Scanned from an old slide.. can´t really remember if it was Ecuador, Peru or Bolivia? 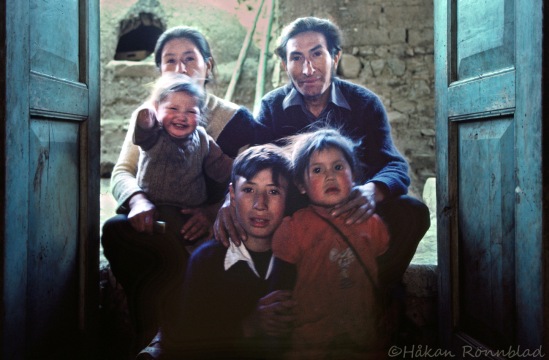 He approached me on the street and asked “señor.. usted puede hacerme el favor de tomar una foto de mi familia?”  Mister.. can you do me the favor of taking a photo of my family?

This was in Huandoval in 1979, a small isolated village in the Peruvian Andes.

I went with him in to his house and suggested them to sit down in the doorway.

drink. There was never any desire expressed for a copy of the picture, they just seemed happy enough for having their portrait taken.

Hope they are connected to the web today and google on “Huandoval”.  If someone recognize this family I would be grateful for some information.

The WordPress.com stats helper monkeys prepared a 2012 annual report for this blog. 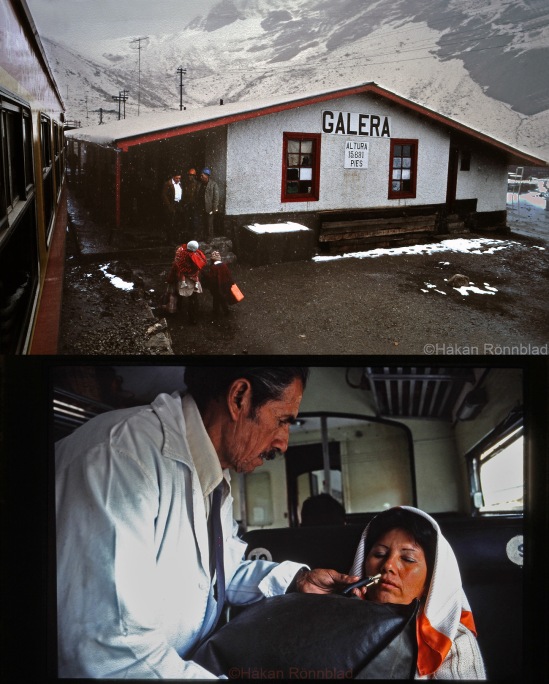 One of those trips to remember for sure, not only because of the heavily armed escort of peruvian soldiers (this was in the eighties when “Sendero luminoso” guerilla movement were active in the country. In 1992 the line had to close down for several years when bomb attacks killed 20 persons in the crew) but also because it happens to be the highest passenger railroad track in the world.

The route starts in Desamparados station in Lima at sea level. After an hour it reaches the town of Chosica. This is where the climb begins and we are not talking a simple uphill here we are talking the steep vertical mighty Andes.

The train totally passes 59 bridges and 66 tunnels on its dramatic and winding 12 hour journey through the cordillera to Huancayo.

The quick climb to altitudes close to 5000 meters is a brutal shock for the human body so the train company has a special service for the passengers who suffers from mountain sickness. Extra oxygen delivered by a man dressed in white. (see photo)

More or less half way on the track the train pulls in to “La Galera” station. At 4,781m it is the world’s highest train station. Compared to the dry pacific desert around Lima this is a completely different scenery and climate.

After climbing a few meters more the “Tren de la Sierra”  starts to descend down towards the peruvian highland and the final destination of Huancayo.

was walking the pilgrim trail towards Santiago de Compostela in Spain. She is Peruvian and 87 years has passed since she was born.  We met her, half running and in good spirits with her daughter and grand-daughter some 110 kilometers before Santiago.  I´d like to be in that shape when I reach that age.

You meet a lot of interesting people along the Camino de Santiago.

This 87-year-old Peruvian lady is walking “El Camino” with her daughter and granddaughter. At this place, close to Sarria in Galicia, they still have more than 100 km to do!

The picture was taken the 11 of September. Me and Katja arrived to Santiago last night after an exhausting final distance of 36 km. 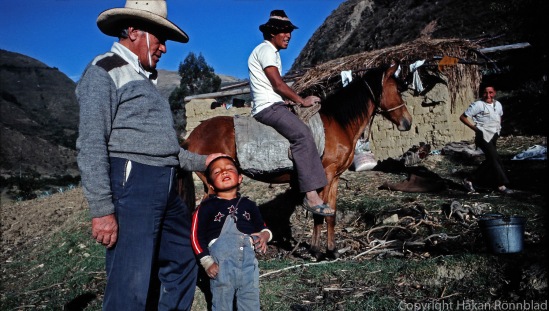 Finishing todays work at the maize field the little boy is enjoying the warmth of the sun and the caring hand of his grandfather.

It can get chilly in the Andes at these altitudes.  This is Huandoval, Ancash province in northern Peru!

(click tag Huandoval to see more from this village)

During my visit to the remote and isolated village of Huandoval in the Ancash province in northern Peru in the eighties, I was lucky enough to be able to make a horseback excursion in the surrounding Andean mountains with the local shopkeeper.

We took off very early in the morning climbing the mighty Cordillera Blanca. Highlights on this adventure was when we after a couple of hours passed some old Inca ruins!

The road (path) in the picture at the other side of the valley is nothing less than pieces of the “Camino Real” the main road that linked Quito (Ecuador) with Cusco (Peru) in the days of the Inca empire.  Quite impressive to see it like that, especially as I had no previous idea what so ever that these remains was waiting for us on this trip.

When travelling South America some decades ago my budget allowed me to stay only in cheap hotels.

Once I made a visit to Cajamarca in the Andes in northern Peru. Arrived late at night.

As usual I checked in at one of the less luxurious places and fell asleep almost immediately.
Next morning the andean light fell in trough that window, and I saw the graffiti !!

Este hotel tiene pulgas: This hotel has got fleas…