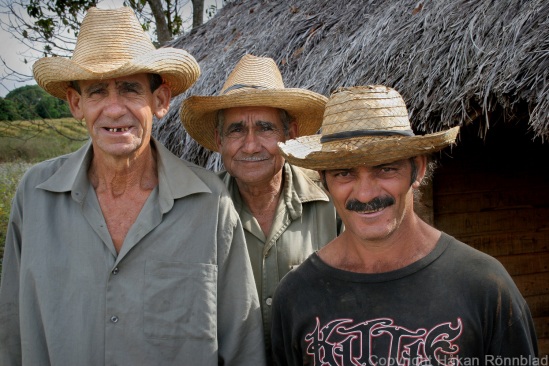 One day when walking around the Viñales valley in western part of Cuba, I met these guys. They did not say much but gave me a pineapple as a gift.
The three guajiros represent the male core of the Noda family. They work the land all day long and
when night falls they go home to their numerous family’s. Three houses in a row, very basic.  They are poor but generous. I have returned to the Nodas several times. I especially remember the day when Pedro (on the right side) took me fishing.

We where quite a few persons that set off for the adventure. Pedros wife, two daughters, a son some boyfriends etcetera.
Pedro as head of the family described extensively all the elaborate moves you need to apply to catch fish in that lake. The kids did not bother much.

After several kilometers walk we arrived.  With a serious look on his face Pedro stepped out in the water and began his quest for the first fish.
He struggled for an hour or more trying all the tricks in the book but NADA, nothing!

Meanwhile his twelve-year-old daughter started to pull up one fish after another.
She caught 11. Her father got nothing!!

Anyway.. Pedro is not the sulking type.  While we tasted the delicious fish prepared on open fire, he took charge of the entertainment by singing, with lots of feeling, a poem to “Mother”
Nice day indeed!

4 responses to “The Noda Clan!”